Dedicated to Animals That Have Found Forever Homes

If you have a story you would like to share with us about an animal you met here at our shelter and now share your life with them please send a photo and your story to Holly Bray by email and we will get it posted here. 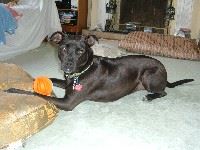 Hi Everyone: This is what I can say about Ruby since we picked her up from Lake County Animal Care and Control on Saturday March 13, 2008 - beautiful, regal, trustworthy, goofy, happy, playful, and gentle!

Despite what she had been through, it was amazing how she still displays so much affection and trustworthiness towards humans. We approached her kennel the minute we arrived at the shelter-called out her name and she came right up with eyes lit up and tail wagging. She was very excited for the first half hour in the car, giving her round of wet and sloppy kisses to the three of us, for the remainder of the trip back to San Francisco. She was all stretched out, looking out the window and taking in the view.

Despite her size she is extraordinarily gentle with our two cats. She has bonded with Milo, our male cat and they enjoy playing tag (that's what it looks like to me)-chasing each other around the house with no growling or hissing.

Ruby was a little clingy at first - following me from room to room. After a few days, she is a lot more at ease and relaxed. She is settling down very nicely. She loves her walks and enjoys riding in the car. Besides enjoying her belly rubs, she also loves to cuddle. She is such a love bug!! We are so thankful she came into our life. What a joy. She will be well loved and taken care of for the rest of her life. We will try our best not to pamper or spoil her, not that we haven't already :}

Once again, thanks for your concern and well wishes for Ruby.

Just a note to provide you with an update on Ruby and Riley, They are both getting big. Ruby is much bigger (7.5 pounds (lbs)) and has a stockier more Jack Russel Terrier (JRT)-like build than Riley (5.5 lbs), who has a sleeker, more rat terrier like build.

We went to Pt. Reyes for three days earlier this month and the puppies had a great time kayaking, playing on the beach and hiking. Unfortunately, two days after we returned, both puppies came down with kennel cough. The virus/ bacteria symptoms themselves were mild and didn't really affect either puppy much. However when Riley first started coughing, we thought she was choking or had aspirated something, so we took her to the emergency vet, who gave her a shot of the cough suppressant, which caused a "dysphoria" (i.e. a bad trip!) that had the poor dog crying for 6 hours straight! We are happy they are both all better now. We will avoid "pet friendly" bed and breakfasts unless they are up on Bortadella vaccinations from now on.

Both dogs are getting more and more house trained. The warm weather finds them enjoying our backyard much of the day while I toil at the computer. They both come and sit with me while I work. They love their twice daily walks and they wrestle and play together when they aren't sleeping or walking. Next month, once they finish their puppy shots, I will enroll them in an introductory training class.

I hope you are all doing well, Take Care!!! 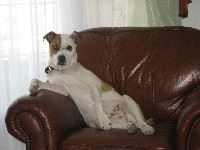 This puppy arrived at our shelter on March 31, 2008 rescued by an anonymous citizen from a local reservation. Upon arrival this puppy was starving weighing in at 26 lbs. He stayed at the shelter patiently waiting his turn for a loving family. Over the month long period he quickly gained weight (20 lbs) and personality. The shelter staff was beginning to worry that he would not get adopted due to his breed and behavior issues. The staff worked with him everyday growing attached but also preparing for reality. Time was becoming short and just when we were all out of ideas a rescue group stepped forward to rescue this crazy adolescent puppy along with a couple of others unwanted dogs. On May 2, 2008 Chico was transferred to a rescue group in Sacramento where he finally found his forever home and his favorite leather chair. 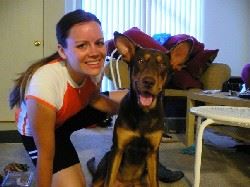 My name is Katie Forndel, and I was checking out your website, as I do often, when I realized that you have no success stories listed. I thought I might send in my own experience with your shelter.

Almost five months ago, I saw a Kelpie mix boy on craigslist; he was listed as simply "kennel 21". He had no name. All that is known about him is that he was found as a stray in Kelseyville. The picture of him on Craigslist, with his sad face and big ears completely stole my heart! I found myself returning to that ad over and over just to see that beautiful picture of him. A few days later I found he was on the urgent list. I knew I had to act, so I got in touch with some local rescue volunteers to try and arrange something; I wasn't sure I was ready to have a dog, but I knew I could financially sponsor him if he could be rescued. There was no foster home for him, so I decided to take the plunge and adopt this boy.

Transport was arranged through Grateful Dogs Rescue. Two days before picking him up the volunteers got a call to tell them that this would be "Kennel 21's" last night at the shelter; if he didn't leave tonight, he wouldn't leave at all. Such is the sad reality of a rural, over-crowded shelter with no shortage of animals but a dearth of adopters. Emergency transport was arranged, and "Kennel 21", or "Rowdy" as he came to be known at the shelter, was finally free. He stayed with a foster parent for two nights; over that time he was bathed, given shots, microchipped, neutered, heart worm tested; he also got his nails trimmed.

When I first laid eyes on my boy he was very skinny, his fur was dull, and his bones protruded, but he was friendly and gentle and, to me, beautiful. He was confused on the car ride home, standing up the whole time. He took a few days to settle in at home, over which time he developed kennel cough. Even though he was under the weather for two and a half weeks, he proved trainable and eager to please. He was sitting on command in less than 24 hours.

In two months, I fell more in love with my big guy. He has put on 12 pounds, has developed a beautiful shiny coat, and has become best friends with every dog he's ever met. He runs and roughhouses with the best of them at the dog park, but when he's home, he knows how to settle down and relax. He graduated from elementary dog class on Saturday. He can "sit" and "down" and is working on "leave it". He comes to work with me every day and gets to play with the other dogs there; when he's not playing, he settles down under my desk with a treat or he naps. He's really living the life! Everywhere we go, we get comments on his wonderful disposition, his striking color, and his goofy mannerisms. The most important thing to me is that now this loving guy has a name; we call him "Cal". He has no idea how close he came to never leaving the shelter; thanks to all the hard work of your staff, volunteers and those of Grateful Dogs, he'll never have to worry about that again. He will always have a name, and a home, with me.

Thank you for all that you do,